Suicide Prevention: Not for Suicidal People

But I decided I should give it a fair trial.  So I Googled "suicide prevention."  What follows is some of what I found.

The first non-ad link was for the National Suicide Prevention Lifeline.  That sounded promising, so I clicked it and saw that their big deal is their help line.  They want me to call for help.

Well, I don't want to call a damned phone number; one of depression's symptoms is isolation and I don't want to talk to anyone.  Besides, the only time I ever called a hotline (not this particular one) and said I was suicidal, they put me on hold.  I hung up.  I have no intention of ever calling one again.  Can't they just give me something encouraging to read?

Then I saw a tab entitled "Get Help."  When I put my cursor over it, I was excited to see what kind of "Help for Yourself" I might find.

But when I saw the categories, I realized there would be no help for me there.  So the "Lifeline" was lifeless for me.

The second link was for the Web site of the American Foundation for Suicide Prevention (AFSP).  I entered "I am suicidal" in the search field, and on the second page of search results I found "I am struggling."

So I clicked and in big letters it said that if I was "in crisis," I should call a specific phone number.  Remember that one of my symptoms is that I don't want to talk to anyone.  Not helpful.

I tried some of AFSP's other links, and they took me to pages that were suited to professionals.  They offered "testimonials," so I went to that page and saw that most of the testimonials were of people who were suicidal themselves after they lost someone to suicide.  To be frank, if I'm suicidal myself I don't want to hear someone whining about how hurt they were.  I'm looking for someone like me.

And then I found this little AFSP gem:


On experiencing relief after a suicide loss:

It can be extremely difficult to admit you may feel some relief after a suicide loss, inducing additional feelings of guilt, shame, or anger. It is not uncommon to feel relieved in some ways. Chronic mental illnesses can take a huge emotional and physical toll on families and communities. It is very hard to watch the person you love suffer with severe mental health issues. It can be a relief that their suffering is over, as well as your struggles. . . .

The third site was Helpguide.  Here I found the very first thing that appealed to me: "Most people who commit suicide don't want to die—they just want to stop hurting."  Okay, now they had me; they knew how I felt.  Further down the page there was even a link to a page they called "SuicideHelp." 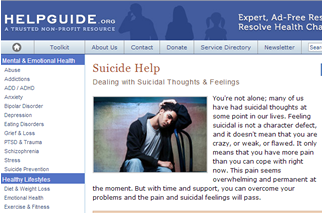 Finally, here was what I needed.  Funny thing, though, this was not even a suicide prevention organization.

And the fourth link was to the National Institute of Mental Health.  Here I found lots of scientific stuff, studies, overviews, facts, and statistics, but nothing to help a currently-suicidal person.  There was a link to the Centers for Disease Control and Prevention that looked promising, but again I just found scientific articles.  After many clicks and links, I located this advice from the Mayo Clinic:

Very hard to find and not the most effective advice, but at least it was aimed at me, not some "survivor."  But again, the Mayo Clinic is not a suicide prevention organization.

Well, you get the idea.  It appears to me that these suicide prevention people are a selfish bunch.  They focus on the harm that suicide does to survivors. They are all about themselves. They want to prevent other people from feeling the loss that they have felt.  But I don't get the feeling that they want to talk to a suicidal person to learn about how the person is feeling.

Too bad, because that's how they can prevent suicide.


Posted by Prickly Pam at 8:57 AM 2 comments:
Email ThisBlogThis!Share to TwitterShare to FacebookShare to Pinterest

"Behavioral Health?" What does that even mean?


That's the term for what I guess I don't have.  At least not right now.

Long ago, the head of a social services agency told me that "behavioral health" was meant to be a kinder, gentler term than "mental health."

Well, I think it's demeaning.  And I told him so.  To me it sounds like, "If those crazy people would just behave better, they wouldn't have all this trouble."

The term has been around for years, but what does it mean?


Definition 1a in the Merriam Webster online dictionary defines "behavior" as "the manner of conducting oneself ."  It also lists synonyms for "behavior" as "actions, address, bearing, comportment, conduct, demeanor, deportment, and geste."  "Behavioral" is listed as an adjective related to behavior..
An article in the online Encyclopedia Britannica defines "behavioral science" as "any of various disciplines dealing with the subject of human actions . . ."


And definition 1a for "health" in Merriam Webster online is "the condition of being sound in body, mind, or spirit . . . ."

Britannica calls it "the extent of an individual’s continuing physical, emotional, mental, and social ability to cope with his environment."


So let's put that together.  "Behavioral" describes human actions and "health" means sound and able to cope.

As near as I can figure it, then, "behavioral health" would mean that my actions are sound and allow me to cope adequately with my environment.

So what does this have to do with depression, schizophrenia, bipolar disorder, and other so-called "mental illnesses?"

Does "behavioral health" mean that if my actions were sound I would be able to cope with life without getting a mental illness?  That's sure what it sounds like.  Well, that's incorrect.  And it pisses me off.

If we talk about breast cancer, the absence of the illness is called "breast health."  And for those with diabetes, there is a magazine called "Diabetes Health."

Since the term for such diseases as major depression and schizophrenia is "mental illness," why not just call the absence of such diseases "mental health?"  Or, since these illnesses are brain disorders, how about "brain health?"

But, please, I beg you, don't call it "behavioral health."


Posted by Prickly Pam at 9:52 AM No comments:
Email ThisBlogThis!Share to TwitterShare to FacebookShare to Pinterest


One of the symptoms of depression is "anhedonia."  It is defined as "inability to enjoy doing the things that are normally enjoyable," or "Loss of interest or pleasure in normal activities."

That just kind of sounds like boredom.  It can't be all that bad, can it?

Well yes, yes it can.

A philosophical Wikipedia editor describes the feeling well in the entry on Boredom  "Without stimulus or focus, the individual is confronted with nothingness, the meaninglessness of existence, and experiences existential anxiety."

I'll give you some examples of things you might enjoy, and how you might feel about them if you were depressed:

You love to watch football.  You have a favorite team and you never miss one of their games.


But now that you're depressed, you really don't care about it.  You think it would be nice if your team won, but you can't watch more than a few minutes of a game until you're bored with it.

You love to read.  You can read for hours on end when you have the opportunity.


But now that you're sick, you can only read a few pages.  Then it feels too hard, and just not worth it to keep reading.  If you have another book started, you might pick that up for a few minutes and put it down again.  Blah.

You like to work on projects around the house.  It could be a remodeling project or a crafts project and you love to spend time on it.


But you're depressed now.  It's almost impossible to get up enough motivation to work on a project.  And even if you finally get motivated, you lose interest in the project very quickly.  It's just no fun.

You have several favorite TV shows.  You know what night they're on, you wait excitedly for that night, then you follow the plot closely.


From your place of depression, the shows just don't matter anymore.  You may tune in, but it's an effort to concentrate on the show.  It's hard to believe, but you just don't care about what's going on.

You love to do puzzles.  Crossword, word search, Sudoku, scrambles -- you love the challenges.


Depression makes them feel like a waste of time.  Besides, your brain just can't come up with the answers.

You can surf the Web for hours.  One site directs you to another, then to another, and yet another, until you've used up your spare time.  There's so much cool stuff out there!


You're sick now, and things just aren't as interesting.  For some reason, it feels like a huge effort to type and click, and you close your laptop and put it away after a short time.

You're a napper.  You can always curl up and go to sleep for a short or long nap.


Now that you're depressed, you lie there and think, "I'm so tired, but I don't even feel like doing this.  I can't sleep anyway."


So.  Now what.  There is just nothing you want to do.


You are too antsy to sit still and do something quiet, but you are too weary to do anything that requires motion.

When you add this to the other challenges of depression, it's like being bored to death.